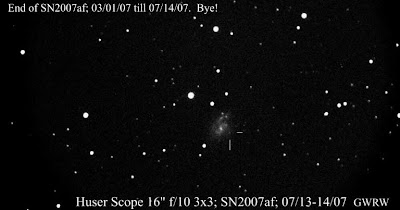 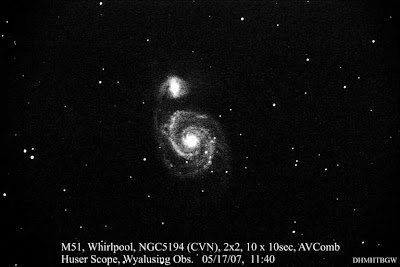 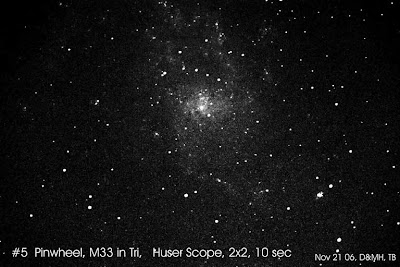 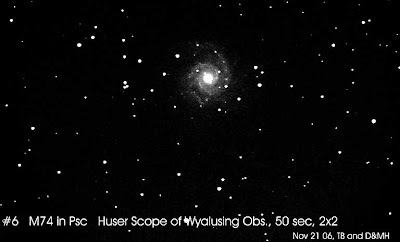 M74 or NGC628 in Psc, is a faint but nice Messier object. It shows the spiral galaxy almost face-on. Distance 40 million l-y. 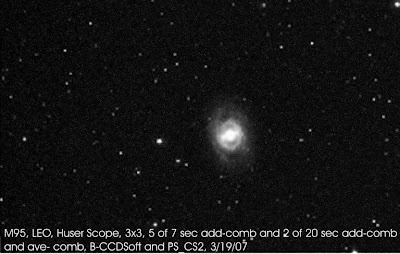 M95 in Leo and M96 (only ¾ degree apart and about halfway between Regulus and Denebola) form a nice pair of spiral galaxies in the center of constellation Leo. M95, the western one, is 30 million l-y away. 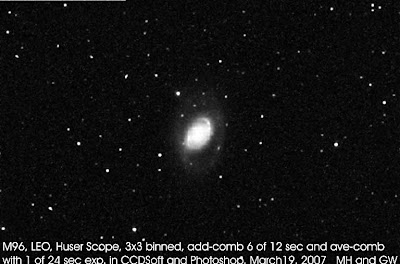 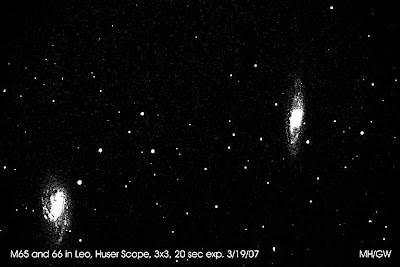 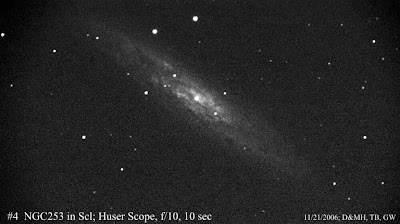 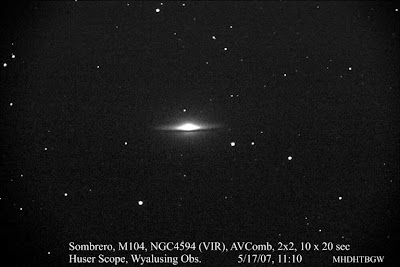 M104, Sombrero Neb or NGC4594 in Vir, is mag 8.7 and 30 million l-y away. Its diam is 75,000 l-y. M104 features a large black hole in the center, est. at 750,000 solar masses; it is also a very strong radio source. The two pictures are from the same FITS source, but differently processed in PS; in this Gallery format however, the difference is negligible. 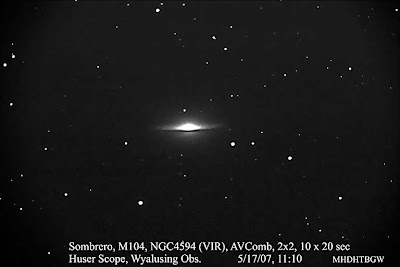 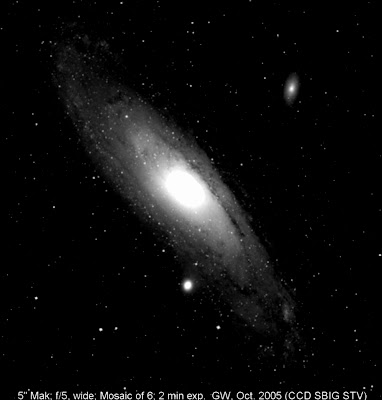 a. A wide image of Andromeda Galaxy, made from six smaller frames (“mosaic-ed”). It is in the Andromeda constellation and measures 2 1/2 by 1 degree of arc. Our Milky Way and Andromeda are in the same Local Group. Its distance from us is “only” 2.6 million l-y. 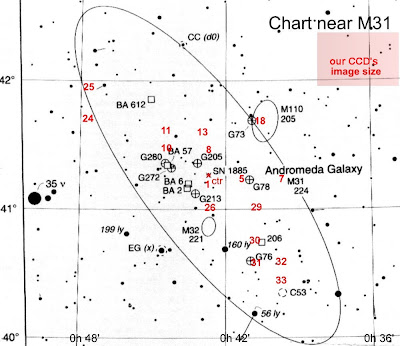 b. A map is needed for our “exploration”. You can find these charts on the web in a variety of detail. I marked the center and numbered the spots where I took images. The set-up of our Huser Scope and Camera gives us a field-of-view of 40 arcmin by 26 arcmin, indicated by the size of the pink rectangle at the right top. 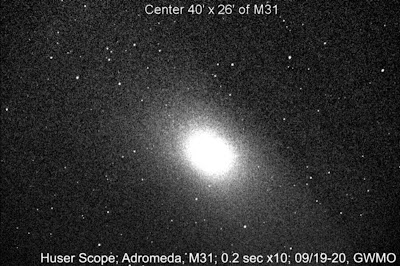 c. The FOV covers only the immediate center. It is bright in the center! Only 0.2 seconds exposures can be taken. Our exposures varied from .2 to 200 seconds depending where we aimed. The brightness varies that much. 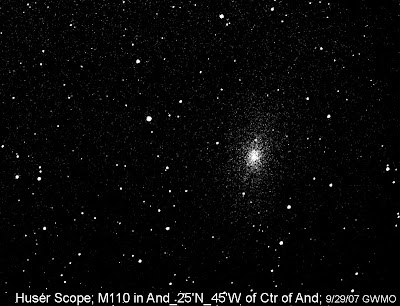 d. M110 can be found too, right where it should be. This is a small galaxy being merged into Andromeda.

e. Some open star clusters can be found, similar as those we see in our galaxy. 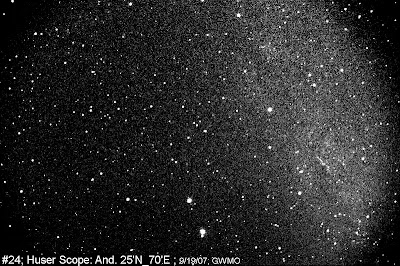 f. Some more of those are at the NE edge. Interesting are the ones that have several stars patterned as little “chains”. 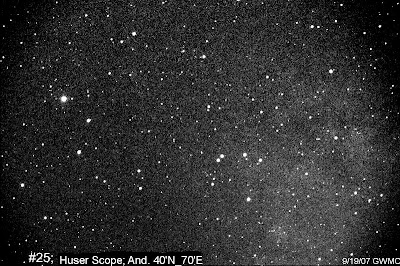 g. At the NE “end” two more clusters can be seen and notice too the large amount of “doubles”. Over 50% of all stars are “multiples”; our Sun goes solo as you perhaps know. 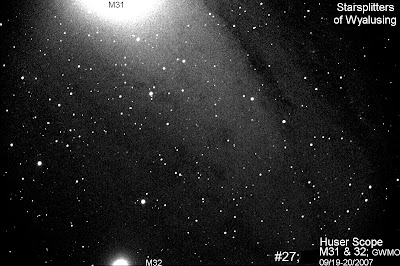 h. Slewing back to Center and then going S and W 15 arcmin bring the scope to between M31 and M32 and avoid overexposure that way. The bright centers are almost outside FOV and more details is preserved. 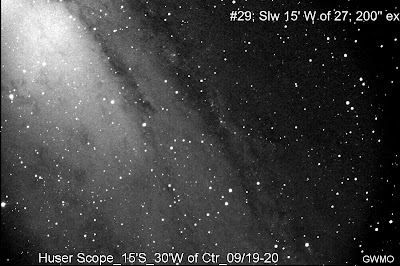 i. Slewing 15’ S and 30’ W brings only the dim part on the image and we could go to 200 sec exposures. The “arms” of Andromeda show up well now, in spite of looking at a sharp angle to the disc of the galaxy. 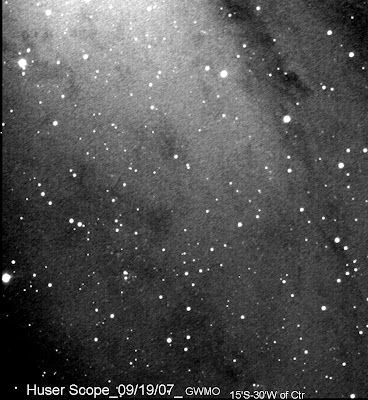 j. Here I took a detail of the image in ‘i’ and enlarged it to match a photo I located on the web, shown in the next photo (k). 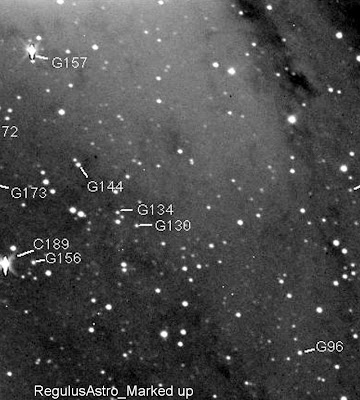 k. This is the photo I located on the web to match the previous photo (j). RegulusAstro published this photo and marked it up with objects drawn on atlases of Andromeda. It is fun to find and compare these objects on both images. 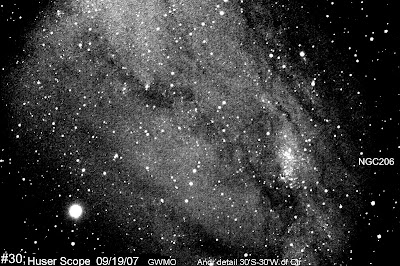 l.  Exploring farther south, 30’ S and 30’W of Center, I encountered NGC 206. For the first time I saw details in this cluster, so far I had only seen the “smudge” of it. This is a cloud of dense gas and young stars akin to the central area of the Big Nebula of Orion, a birthplace of stars thus. 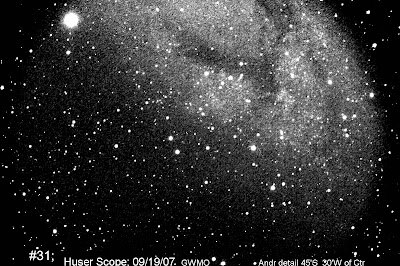 m. I dropped another 15’ S as you can see by looking at the bright star at top-left. This star is nearby, 160 l-y, and thus not part of the Andromeda Galaxy. 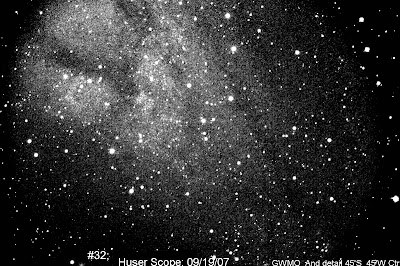 n. To get the design of this part better centered, I moved W 15’. Several open star clusters could easily be distinguished. 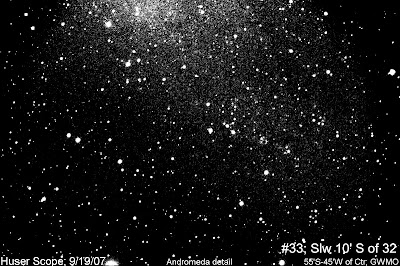 0. Finally I went to the southern edge, 55’S and 45’ W of Center of Andromeda. Galaxy. The star showing only half next to the 7 of my date, marks ‘the end’. This star is only 56 l-y from us and thus very much in the foreground.
The Milky Way and Andromeda are approaching each other at the breakneck speed of 100 miles per second. In two billion years we’ll be roommates! 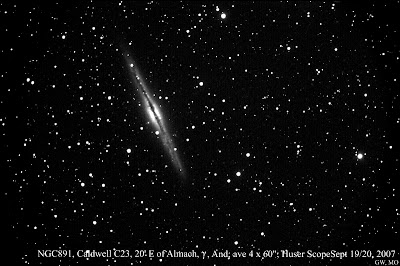 p. While in Andromeda Constellation anyway I had to drop by an old friend, NGC 891. This is an edge-on galaxy, really ‘edge-on’; its dark lane shows perfectly. ‘891’ is ten times farther away than Andromeda. Its magnitude is therefore only 12-13, but no problem for our Huser Scope. It shows up as a gem.
Return to top of page