“Horsehead, IC434 in Orion, is a dark nebula that we revisited; in 2007 we made the earlier version. Now with more experience and additional processing programs we could reveal much more detail. Layered Contrast Stretching from R.J. Gabany in Sky&Tel of June 2011, among others, improved the contrast significantly.” 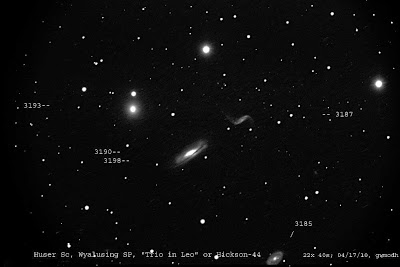 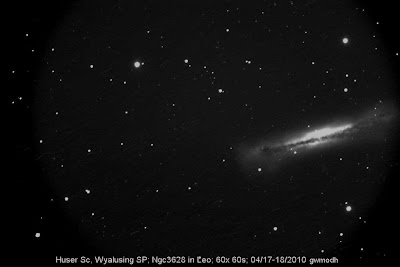 3628-1 Ngc 3628 is the northern one of the Leo Triplets (with M65 and 66), which are gravitationally interacting; distance is 35 million l-y. The edge-on galaxy is deformed by this interaction. X-ray spectrography indicates a large central Black Hole. 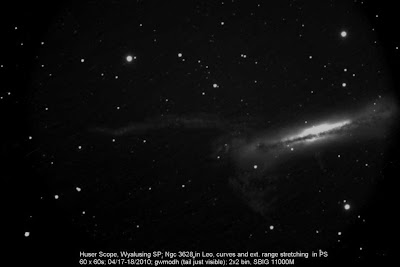 3628-2 (adjacent to 1) A very faint “tidal tail” is drawn out to the left (about half a million l-y long!). It took some very non-linear “stretchings” to bring the tail out as shown, but at the cost of sharpness. The exposure was one hour. 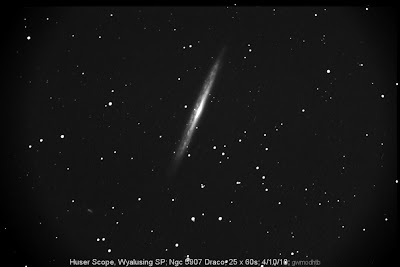 A__5907_Draco: Ngc5907 in Draco, also named “Splinter” or “Knife Edge” galaxy, is 40 million l-y away. It is of interest because it captured a smaller galaxy 4 billion years ago. This resulted in a halo of matter just detectable with an 11-hour exposure. We’ll try to image this galaxy’s ring soon. 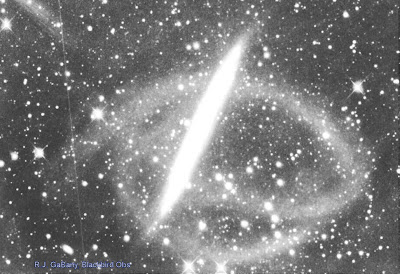 B__5907_Blackbird Observatory: 5907 as pictured with a 20” R-C by R.J. GaBany et al at Blackbird Observatory in New Mexico, in an 11 hr exposure spread over 4 nights in June and August of 2006. It required extreme nonlinear “stretching”, but the halo did show (magnitude of the halo is around 27). I experimented with that on Ngc3628’s tail. 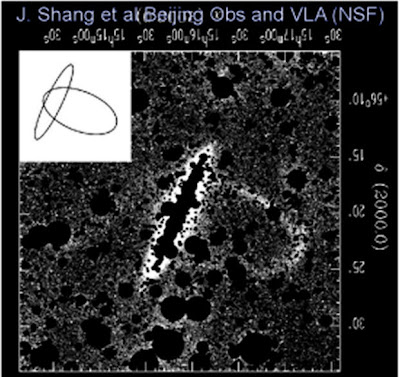 C__5907_Beijing Obs: Shang et al imaged the halo or ring also with the VLA and shown here. VLA (NSF, US) is the Very Large Array of radio telescopes (image rotated to align). The stars are depicted (blocked) as black dots. The image obtained at radio frequencies adds to the spectrographic data. 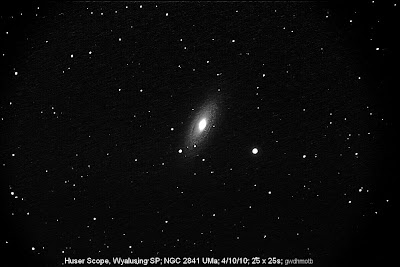 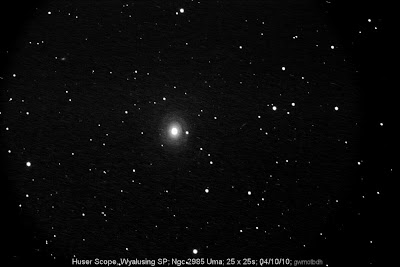 E__ 2985: A nice face-on galaxy in the Big Bear referred to in the literature and on the web as “featureless”. OK, confirmed, but still nice. 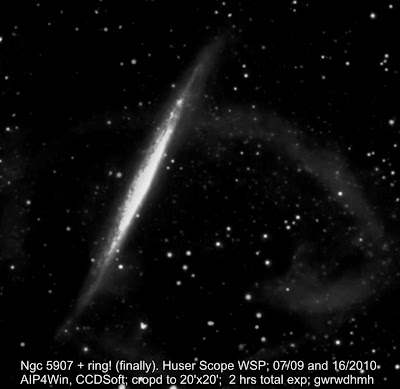 We tried to image 5907’s “ring” and just made it. The mass of the “Splinter Galaxy” (5907) alone could not have caused the ring shaped trail of the smaller captured galaxy. The large spherical cloud of Dark Matter around 5907 is adding enough gravitational pull to explain the “ring”. 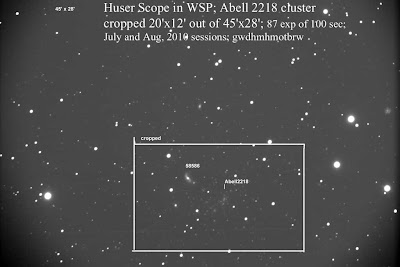 The gravitational “lensing” of Abell 2218 is considered evidence of a large cloud of CDM (cold dark matter) around 2218. This cluster of galaxies is 2 to 3 billion l-y away and the “lensed” objects, galaxies, are even farther away and behind it. We see (photograph) their distorted images as “Einstein arches”. 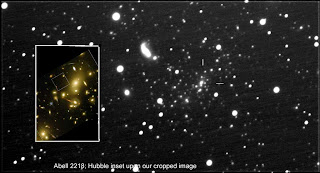 The famous HST photo is inserted and aligned onto our cropped image. These images are extremely dim and require hours of exposure spread over several photo-sessions. We are sure now that we have the right one.  The reddish arch at 7 o’clock in the HST inset is it and should be just bright enough to show on our image. 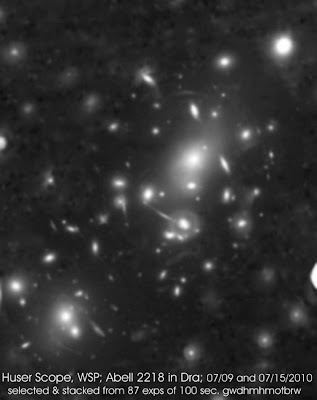 Hurrah, it did show! After enlarging and enhancing our photo (in B/W) is sensitive enough in the IR to show the Einstein arch in the correct spot. The extreme “stretching”, enhancing, has its price in introducing much noise. It is tough to compete with the Hubble Space Telescope! 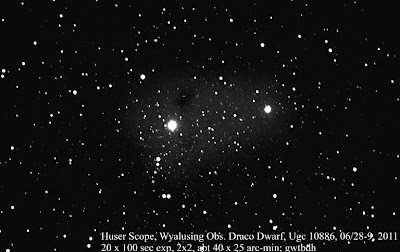 Milky Way galaxy has over a dozen of dwarf galaxies. The Draco-Dwarf is near, 270,000 l-y (Andromeda galaxy is 2.2 million l-y away) and interesting as it has a much larger halo of CDM, cold dark matter, than the average galaxy of that size. Astro-Physics is paying a lot of attention to CDM lately. Too bad that we cannot photograph Dark Matter halos and Black Holes. 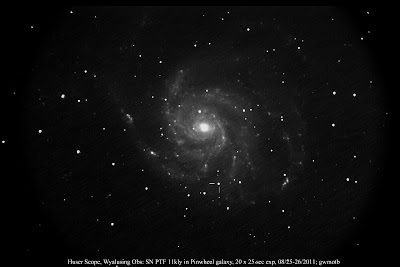 SN2011fe is a Super Nova, detected in the Pinwheel Galaxy, M101, on 08/23/2011 by the Berkeley Group and published on 8/25. I have marked it. Its brightness that night we estimated at 10.5. We hope to photograph it again in a week or so to determine the increase in brightness and next month when it could be at its maximum.

Return to top of page